François Demachy and the face of Miss Dior Natalie Portman

François Lemachy has been the creator of Dior perfumes since 2006. Before Dior, he worked with Chanel and Tiffany. He is an impressive artist and one of the few trained perfume makers around.

He reinvented Miss Dior with Miss Dior Absolutely Blooming and created many new perfumes including Sauvage. His latest  fragrance is called Joy by Dior. It is officially available at Holt Renfrew! 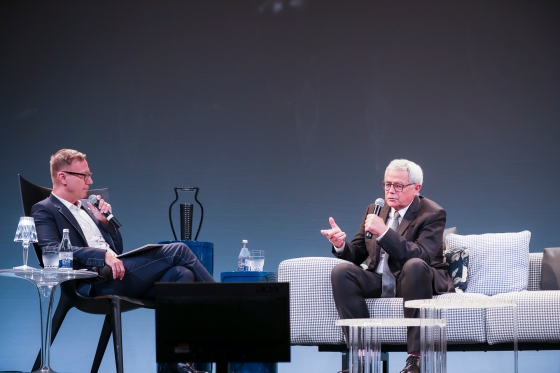 I had the opportunity to attend a Festival Mode & Design event this week during which François shared everything about the secret art of making perfume and working with the face of Dior‘s latest perfume Joy by Dior Jennifer Lawrence. Everyone in the audience of the sold out event was also given a sample of the new perfume. What an experience!

A 1947 invitation to the launch of  the original Miss Dior

In doing research about the house of Dior, I discovered that Dior‘s first perfume Miss Dior was named after Christian Dior’s sister Catherine. Her story is an incredible tale of courage. (I don’t know why they haven’t made a movie about her.) She was captured and tortured during World War II. She was eventually released, given several medals for her bravery, and lived the rest of her life in France.  One day she walked into the Dior showroom and Christian’s muse Mitzah Bricard proclaimed “Look, there’s Miss Dior!” Christian loved the name immediately and selected it for the perfume that has lasted generations. He described it as being a symbol of youth and liberty.

I can only imagine the pressure of revolutionizing a perfume so famous with such an incredible story attached to its name. François said it was a challenge because you have a template you have to respect and you don’t have complete freedom to create. It was very clear when hearing him speak that his passion is to “cook” with the best ingredients and total freedom. “Creating perfume is not intellectual, it’s about emotions!” he said.

After the event I asked him what his favorite flower is. He answered that it is the rose “because it is universal.” When he heard my name, he came alive with excitement. “That is also a beautiful smelling flower! It is edible!” He was beside himself with joy talking about this flower and how to cook with it. I found it so touching that as his Dior colleagues were trying to usher him out of the room that he couldn’t stop talking about flowers. His passion is remarkable.  He also said during the talk that he is never really finished creating a perfume.

Jennifer Lawrence is the face of Joy by Dior

He was asked to describe working with Jennifer Lawrence on Joy by Dior. He told us that he and the young star developed a shorthand to talk about the perfume. Dior says their latest fragrance is “An ode to pleasure and glamour, embodied by an icon of youth, the radiant Jennifer Lawrence.

You can buy Joy by Dior perfume here!

What does it smell like? Quite honestly, its a gorgeous orchestra of scents. It smells like the color green, think of a lush jungle. Its packed with intoxicating floral scents, with an undertone of sexy musk, a sweet note that lingers, and a citrus kick. How does it make you feel? Like you are walking into the best party of your life. He has definitely accomplished his mission of creating a scent that embodies pure joy!

Click to read the full story “5 Things You Need To Know About Dior Perfumes”.

JOY BY DIOR, THE NEW FRAGRANCE – COMING SOON The House of Dior is about to reveal its new #JoybyDior fragrance embodied by the stunning #JenniferLawrence. #TheJoyofDior #Diorparfums