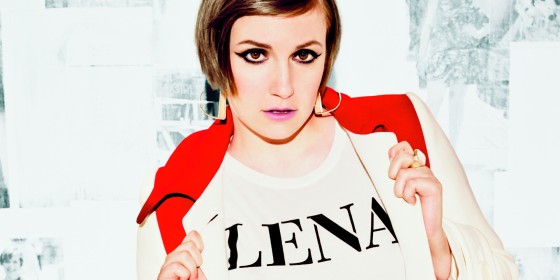 Her NEW newsletter LENNY is here! The newsletter begins in the Fall.  Subscribe here.

Outspoken, honest, and effervescent, at 28 feminist and role model Lena Dunham already has a long list of accomplishments. She has been on the cover of Vogue, been called the voice of her generation, written and directed the Independant film Tiny Furniture, and is the creator, writer, director, and star of the controversial HBO series Girls.  In 2013 Time magazine named her one of the “top 100 most influential people”.  Much has been said about her, not all of it positive, but I am impressed.

Her book Not that kind of Girl has garnered much critical acclaim.  I read it in one seating. It is “not-put-downable” and stays with you for days.  Her book is beautiful, inspiring and of course very funny.

She has made award show red carpets interesting again. She is often criticized for her fashion choices but I love her fearlessness to be feminine, express her eccentric self, and flamboyant when dressing her figure.  I admire her bravery to express herself regardless of the critics and other people’s expectations.

“It completely sickens me what our culture is doing to women. Last week I wore a big top and little shorts and a bunch of stuff came out saying I was without pants. ‘The No-Pants Look,’ it said. And I didn’t go out without pants, I had shorts on…If Olivia Wilde had gone to a party with a big silky top and little shorts she might have been told her outfit was cute…What it was really: ‘Why did you show us your thighs’? “

Girls has filled the voids that Sex and the City left us with.  In 2009 she produced Delusional Downtown Divas, an on-line series that satorialized the NYC art scene.  It gained a strong following and eventually led to Girls.  She acknowledges that Girls probably would not have been possible without the ground that SATC broke, but says she saw an opportunity to tackle the subject of 20-somethings living in Brooklyn post-university trying to figure out how to “make it”.

Not only has Girls filled the void of a show we miss, but she has has filled in the blank of how they got there.  Sex and the City was an important show, but their lifestyles were more aspirational than relatable.  Girls makes us realize that we were thirsty for a grittier reality.  It is refreshing to see stories that expose us to experiences beyond the sparkle of the affluent Manhattan dream.  We never got to see Carrie working at a coffee shop trying to score a writing gig.  We were robbed ! Until now.

Her writing is hilarious. If you haven’t seen Tiny Furniture then you are missing out on a very interesting mother-daughter relationship and one of the funniest sex scenes ever filmed.  Hannah’s brazen honesty on Girls is priceless.  Not every lead character admits to using their “chest as a food tray”…I am still laughing at this one.

She has turned the impulsive decisions we make in our twenties into solid gold.  Where many of us might have marinated in regret, she finds humour and compassion.  Her characters go where they shouldn’t, and it is hugely entertaining to watch.

She is smart. In order to be intentionally witty, you need to be smart.  However, she is savvy enough to stay humble, thoughtful, and articulate in interviews.  Her ability to write so many different types of humour is impressive.  She has amazing instincts and keen skills of observation which she is able to weave into captivating short stories week after week with wonderful strangeness and honesty.

She is without shame and 100% comfortable in her own skin. It takes bravery to write, find your voice,  and produce your own television series and movies. It takes bravery to walk around unselfconsciously in your underwear in front of the world.  This is a touchy thing to say because isn’t any woman doing so degrading herself and desperate for attention?  I think she helps women feel better about themselves by having the guts to show us a real woman’s body without fear or apologies; the owner of which loves and succeeds in life.  I can’t think of anyone brave enough to expose themself the way she does.  Although she says that being nude is not scary for her, I still admire her bold choices.

Many people criticize her for “over-sharing” but for me as someone who is dying to get as close as possible to being “a fly on the wall” when watching theatre, movies, or television, I would say that no television series, that I have seen, has succeeded like this one.  No doubt she was inspired by living with a mother who in her twenties photographed herself nude.  I admire that she is shameless enough to commit to exposing her vulnerabilities and sharing embarrassing moments few people would.

She pops the balloon of the perfect female friendship. Being close doesn’t always mean agreeing and getting along.  Much of the dramatic tension in Girls stems from the main characters differences and are handled in an honest and new way. There is a Girls episode in particular where they plan to “reconnect” at the summer house of a friend and it all goes awry (in Marnie’s opinion), but what does happen is so much more entertaining than the “healing & bonding” originally planned.  The way they do connect at the end is authentic and fresh.

She is a fantastic writer.  Each episode of Girls is fascinating, funny, clever, weird, and nothing is wrapped like a bow.  It is really about trying things out, discoveries, disappointments, and the real moments that arise from characters making unpredictable decisions.   All fertile ground.

Girls introduced us to Adam Driver.  Looking handsome recently on the cover of GQ promoting Girls and Star Wars (!), he is the most exciting actor in my opinion right now.  Did you know he went to Julliard and was a marine?

Adam: “In the military, you learn the essence of people. You see so many examples of self-sacrifice and moral courage. In the rest of life you don’t get that many opportunities to be sure of your friends.”

“At the Emmy awards, everybody runs up to you and says, ‘Aren’t you having the time of your life?’ I mean, I was never after trying to get an Emmy. The whole spectacle seems cheesy and dated. The thing that motivates me most is being petrified of not having a place to put my voice.”

She introduced us to Jemima Kirke. Bohemian free spirit Jemima Kirke played a friend in Tiny Furniture as a favor to Lena Dunham. Her father is a musician and her mother owns a vintage shop that supplied Sex and the City with a few pieces, and the wedding dress her character Jessa wears in Girls.   My favorite Jessa moment is when she is working in a very high-end children’s clothing boutique and sells a tiny black satin dress to a mother for her daughter’s christening that is clearly all wrong.  Absolutely classic.

Her real passion is actually painting, and she is quite impressive.  Check out her work here. 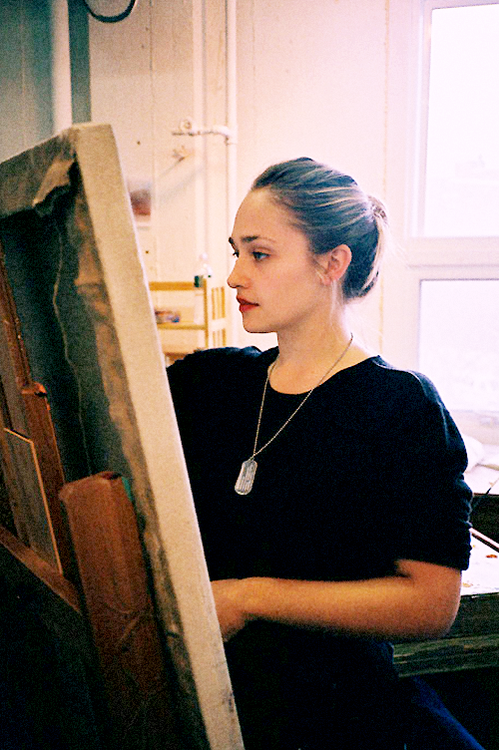 She is a mother of two. I love this picture.

One of the biggest criticisms that befalls Lena Dunham is that she is from a privileged background, and represents a narrow perspective.  It is true that she had parents that were successful artists, but if bravery to express yourself, commitment to your art, and fearlessness can be taught by example; then I am grateful for the opportunity to learn from Lena Dunham’s.

Are you a fan? Here is some great reading !

Be sure to read this fantastic article about her in the New York Times if you haven’t already.

Here is the 2013 cover article about her in Vogue magazine.

Here is a great article outling the 5 main criticisms of Girls and why they are wrong.

Here is a sample from Lena Dunham’s writing in the New Yorker about growing up in therapy and her struggles with OCD.

Lena is working on 2 documentaries, one of which will be about Bergdorf Goodman’s Betty Halbreich.  This should be fascinating. The other is about one of her favorite books Eloise.

Zosia Mamet (our beloved Shosh from Girls) opened up to Glamour magazine about her eating disorder and spoke to Refinery 29 about people’s reaction and about how you can help someone you know with an eating disorder.