I am fascinated by how people get from A to B in their careers and in life.  How do they become successful?  Are they planners? Do they fall into it?  Is it luck meets preperation, or just plain luck?

I reached out to Hilary McGown last fall to chat about her amazing success with food truck turned busy restaurant Grumman ’78.  See her story here.

Hilary told me I had to meet “the most charming man missing a front tooth” I would ever meet.  Apparently he is the artist that created the “Golden Moles” series she was showing at the restaurant, all her branding, and painted the signs for other popular restaurants like Joe Beef and Nora Gray. 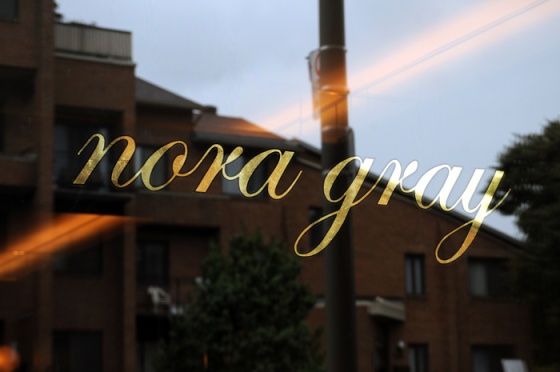 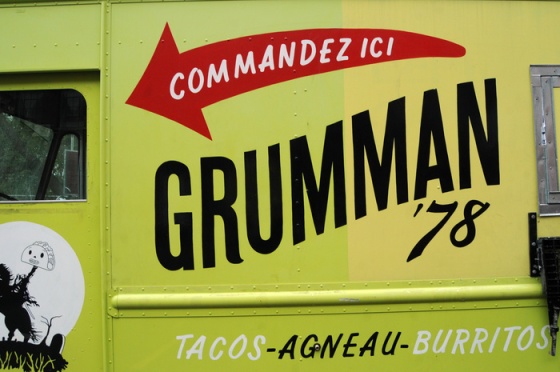 I have always admired these signs.  They seemed like beacons calling out a new Montreal, with a return to eclectic home-style cooking and vintage décor.  Little did I know that there was one man behind Montreal’s foodie renaissance: Mr. Sign, aka Dave Arnold.

Dave and I met last week at his studio near Atwater market.  He had just come from surviving a prank played on him by his buddies at Liverpool House. He was told his vodka shot was accompanied by tomato juice, but he had actually downed an entire shot of tabasco sauce! Clearly this is a man with a sense of michief, always a good ice-breaker. Dave welcomed me with a gigantic Grolsh and made me feel right at home.

Dave is one of those lively guys you could listen to for hours. He shared his whole life story with me, did a quick logo sketch for my blog, and gave me one of his rejected art pieces I fell in love with at Grumman ’78.

I quickly saw that Dave is a joker with a huge gusto for performance and adventure. He is also a very generous businessman who with ingenuity and tenacity, has built up a ridiculously successful business. Even Dave can’t believe his own good fortune. 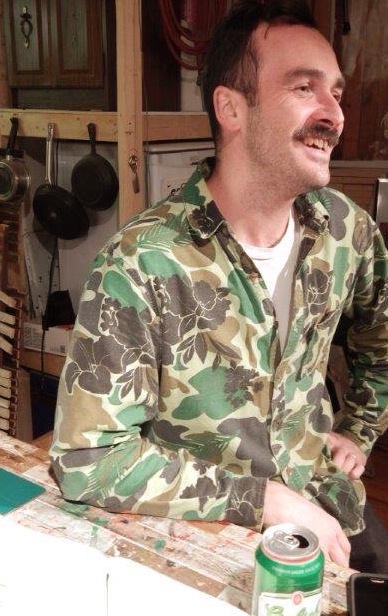 Dave in his studio where he once lived with four buddies. 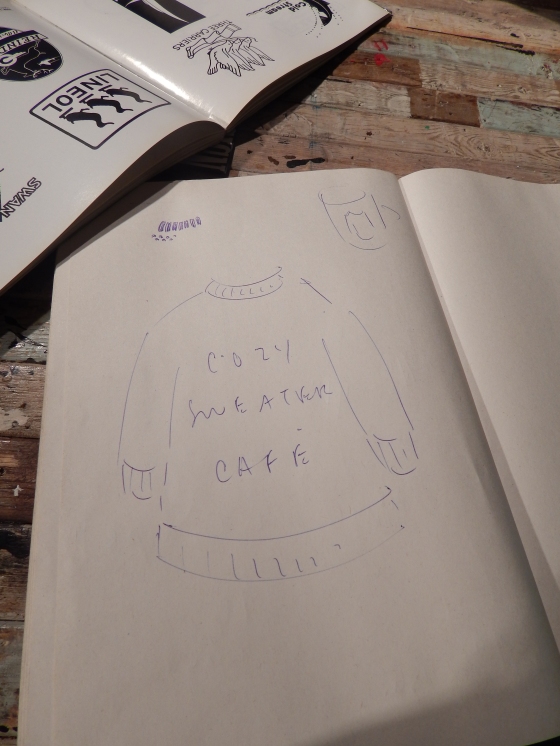 Dave’s quick logo for my blog. 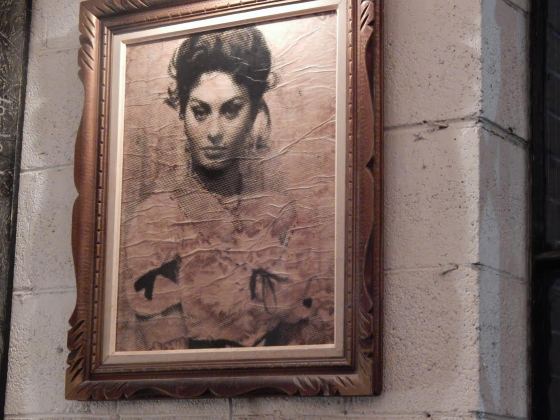 Sophie Loren from the “Golden Moles” collection, on display at Grumman ’78 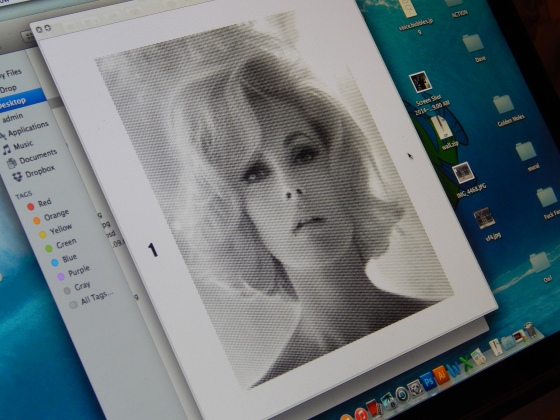 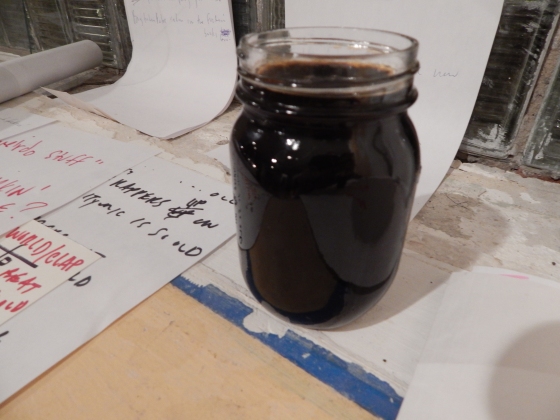 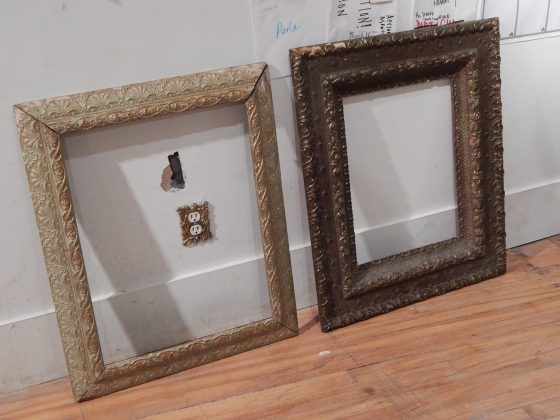 And an antique sign…et voila!

No doubt it is the combination of having a salesman turned teacher as a dad, and a nurse as a mom, that has contributed to his combination of sales wizardry and that generous spirit.

In third grade he discovered this book of logos from the 1930’s and 40’s that left quite an impression on him.  He still looks through the pages with admiration. 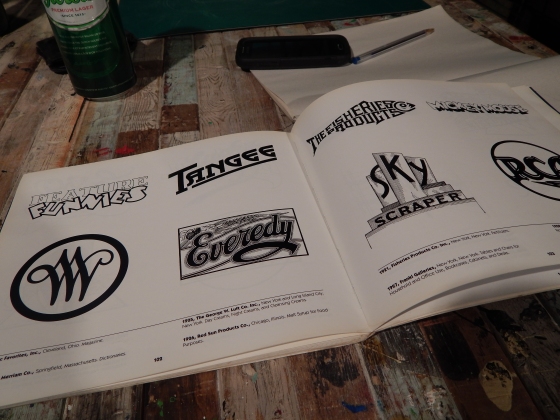 In high school he was the class clown. He actually got kicked out of art class, and eventually dropped out of high school.  (The subject matter he chose to draw got him into trouble.)

Grades didn’t motivate him but earning money did.  He started acting and successfully snared many high paying commercial gigs.  He had a blast bursting into auditions and winning over directors.  He always got typecast as the trouble maker in commercials for products like Herbal Essences.  (I would love to see that one.)  His acting career ended when he lost his front tooth in a fight.  With his substantial earnings he took a yearlong vacation to Costa Rica and grew his trademark moustache.

Eventually he realized that drinking on the beach was not sustainable and decided to return home to Oakville, Ontario where he apprenticed with a carpenter. This suited the mathematically skilled part of his brain, but did not quench his thirst for adventure. 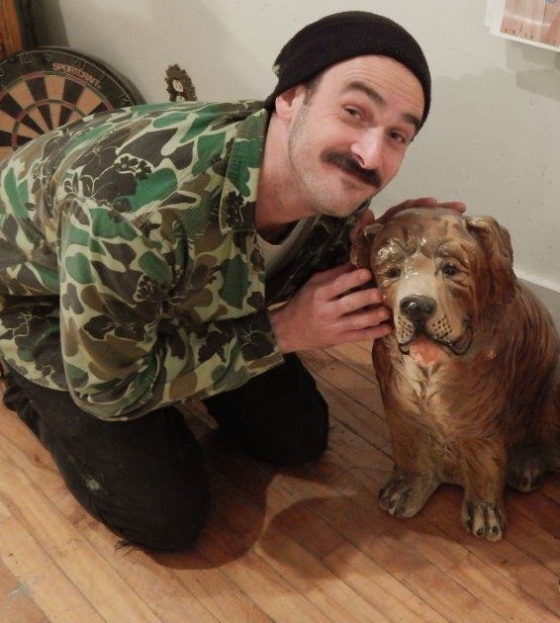 Dave is hardworking and always the clown.

Buddies offered him a gig as a roadie which meant he got to attend the “biggest party in town” every night for three years. He would refuse to check the band’s schedule and instead chose to wander around town and read the signs in order to figure out where he was.  This seems to be his motto in life and in business.  Have fun and figure it out once you get there.

For his next adventure, he moved back to Montreal into his one room studio where he and four friends installed bunk beds.  For rent money, he put his carpentry skills and creativity into designing store window displays for businesses like Urban Outfitters. His letters still reside in the store windows that spell out the store name on St. Catherine street. His displays were very successful and often copied. However, financial promises by one of his superiors were not kept, so he decided to move on. This left him with rent to pay and no income right before the holidays.

The idea that went somewhere unexpected.

He decided to explore if Montreal stores and restaurants would be interested in decorating their windows with his Santa Claus designs. He made a flyer offering his services which he distributed around the city.

The second restaurant he approached was Joe Beef. They weren’t interested in Christmas decorations but needed a sign, and so began the business that for the last five years has been at the forefront of Montreal’s foodie renaissance. 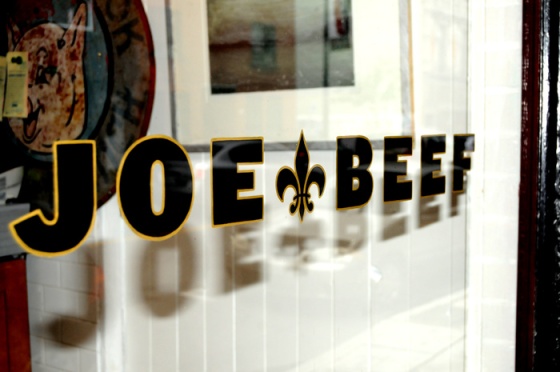 Dave is completely self-taught and will bend over backwards for his clients to get to a simple, exact rendition of the logo they are looking for.  He makes simple look easy, but actually it takes great skill to design a simple clean logo that achieves the desired vintage feel and style statement. This is a skill that he has developed over the years and is not inexpensive to access.

You can check out his impressive portfolio here. 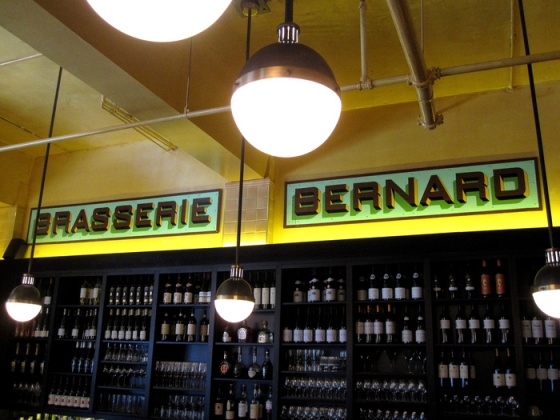 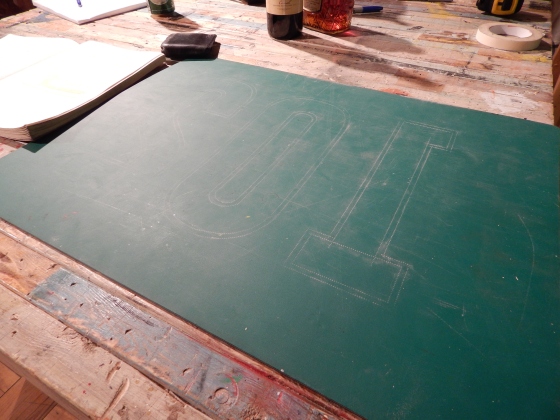 It took three years for him to master using seamstresses’ tools to make his job easier. 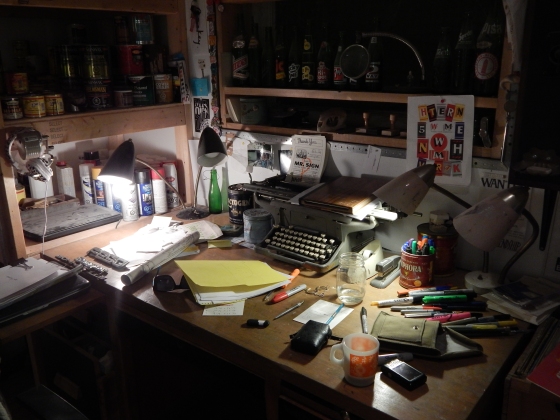 He types his invoices on this vintage typewriter. 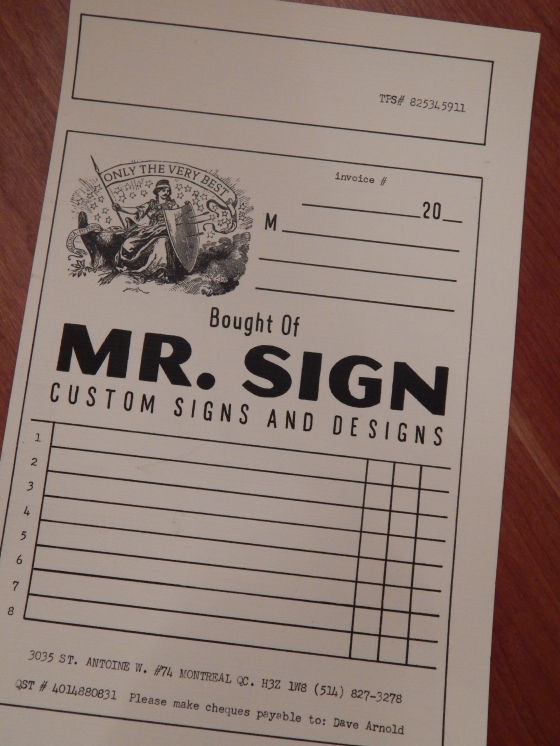 If you are thinking of working with him, I would hurry. This artist’s theatrical side is calling again, so don’t wait too long!

If you don’t require his artistic services, I hope his story inspires you to take a risk, even if you don’t know exactly where it will lead. 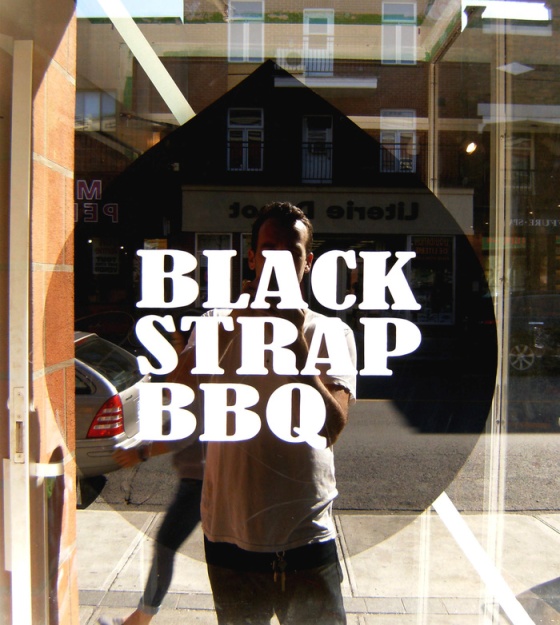 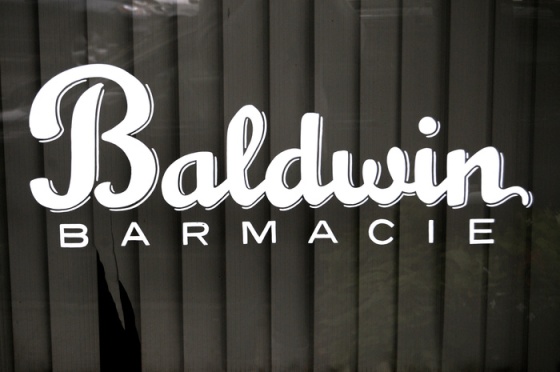 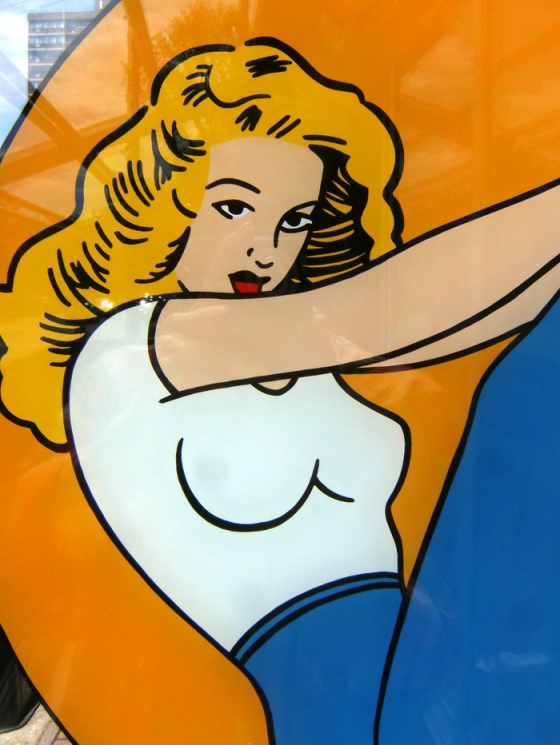 Leave a Reply to the cozy sweater café Cancel reply